May 13th, 2015
A review of some of last year’s new employee-owned companies
Posted by:
Benzamin Yi

In this year’s review of some of the newest worker-owners on the block, we highlight 16 fresh cooperatives—some were founded and others were converted to worker-ownership in 2014. If you find some of these businesses are local to you, we encourage you to support and welcome your new worker-owned neighbors.

Nothing starts a good conversation the way a beer can can, so the next time you’re trying to decide which pint or 6-pack to get, keep in mind that Harpoon Brewery is 48 percent employee-owned (as of August 2014) and plans to become wholly employee-owned in the next several years. Founded in Massachusetts in 1986, Harpoon has grown to become the 19th largest brewery in the country with over 100 employees. As co-founder Dan Kenary gave a “cheers to independent craft brewing and employee ownership” in his announcement of ownership change, we can also raise a pint of Harpoon IPA to both fronts.

Looking for something else to cheers? How about the holiday bonus surprise the RAM Restaurants and Breweries’ 2,000 employees received? RAM, which operates over 30 restaurants in six states, was founded in 1971 as a family-owned business in Lakewood, Washington. Three days before Christmas last year, the current owners, brothers Jeff and Dave Iverson, announced that RAM employees will gain a 30 percent stake in the company through a newly formed employee stock ownership plan (ESOP).

Beer pairs with nothing as greatly as with fried food, so we ought to stop for a second and give thanks to Henny Penny for introducing the first commercial pressure fryer to the food service industry in 1957. Henny Penny has become the 14th largest manufacturer in the Dayton-area region with 2013 revenue of $174 million and over 600 employees. Best of all, on December 30, 2014, the Henny Penny Corporation became an employee-owned company when it sold its stock to their newly-formed ESOP.

If you are looking for a cooperatively produced meal with more substance than beer and fried food, you are in luck. Now you can eat your salads with an even cleaner conscience. Litehouse Foods, Inc. became 100 percent employee-owned on December 22, 2014 after the ESOP was established in 2006. Family-owned for over 50 years, the Sandpoint, Idaho dips, cheese, dressings, and herbs company has 650 employees nationwide.

Employee-owned companies go beyond the food industry, of course, to the real estate and buildings that house these businesses. On April 1, 2014, one hundred and twenty years after its founding, the real estate company Al. Neyer transferred 100 percent of its outstanding stocks to its 45 employees through their newly formed ESOP. The Cincinnati-based Al. Neyer continues to provide services in real estate development support and sustainable building design.

While Al. Neyer is developing buildings, the worker-owned Deconstruction Works specializes in green demolition. Committed to keeping all of its materials away from incinerators, Deconstruction Works salvages and reuses building materials, such as doors and lumber, that would otherwise be headed to the landfill. Founded in 2013, a year later, the Vermont-based green demolition company became a worker cooperative.

Continuing the reduce waste, named after the Spanish word “cero”, which means zero, CERO (Cooperative Energy Recycling and Organics) aims to limit the materials that end up in landfills. Servicing businesses in the Boston area, CERO has cut waste for local restaurants and other businesses by at least 50 percent through sorting and selling paper, plastics, metals, vegetable oil and organic food waste. The five-member worker-owned recycling and composting cooperative was launched and crowd-funded via Indiegogo in 2013, and became operational in 2014. They are now raising more capital under a Direct Public Offering (DPO), which allows community residents of Boston to make non-voting stock investments in CERO.

Another business crowd-funded through Indiegogo is Shift Acupuncture Collective who were funded last year and was able to build from a solo practice to a multi-lingual three-member collective clinic in Oakland, California. Its goal is to make acupuncture affordable for those with linguistic, cultural, financial, and childcare barriers. Shift Acupuncture met their fundraising goals, and launched its worker-owned clinic in the fall of 2014.

Three is company and can form a company. The Little Weaver Web Collective is a three-member web development cooperative founded in 2014 committing to socially responsible practices while encouraging their clients to do the same. Though the members are spread throughout the country, their initial projects originated around Oberlin, Ohio, but they are now operating in Seattle, New York City, and Washington, DC. They have worked on the websites for Detroit public radio (WDET), the Oberlin News Center, and other educational resource projects.

The third in the list of three-member worker-owned cooperatives, the Cooperative Labor and Economic Access Naturally (C.L.E.A.N.), is based in Portland, Maine. Founded in 2014 to make “economic security accessible to ourselves and other workers who commonly experience barriers to employment,” this small housekeeping cooperative uses environmentally-friendly cleaning products and methods, in addition to  collective governance and a profit-sharing structure.

Joining the clean, green co-op team is Pa’Lante, which means 'moving forward.' True to its name, the employee-owners of Pa’lante Green Cleaning are moving forward, founding a cooperative and democratically run workplace. This 15-member cleaning cooperative, the fourth employee-owned cleaning service in New York City, had their grand opening in April 2014. Workers, who once earned $20 a day with their past employers, are hopeful to boost their wages to $20 per hour as worker-owners. Pa’Lante got its start from the $1.2 million grant awarded by the New York City Council to support cooperative development along with the help of the Center for Family Life, a Brooklyn-based worker-cooperative incubator.

Forming a different type of green team, in 1988, Eileen Michaels founded A Yard & A Half, a Waltham, Massachusetts-based landscaping firm. Michaels helped advance the company to placem in the top 3 percent of all women-owned U.S. companies in 2009. When Michaels retired in 2013, she sold the company to employees, which gave birth to A Yard & A Half Landscaping Cooperative, Inc. By the time the cooperative had completed its transition to full employee-ownership, the staff had grown from 13 to 22 worker-owners, many of whom are women or Central American immigrants. The worker-owners found the cooperative model a natural step because “the company [had] historically operated with open books, shared profits with employees, and involved employees in decision-making.” Formed to “preserve and continue to develop a locally owned, safe, just, and democratic workplace in an industry where workers often face exploitation, wage theft, and hazardous working conditions,” A Yard & A Half demonstrates how cooperatives can uplift workers not only economically, but socially.

From working outdoors in the sun to working indoors in a lab, worker-owned companies provide financial security for all types of businesses. Just before 2014 came to a close, the Riverside, California analytical testing company Babcock Laboratories, Inc. became 100 percent worker-owned through conversion to an ESOP. One hundred and nine years after its founding, one of the last independently-owned and operated commercial laboratories in California, offered its over 80 employees a real stake in the company.  These worker-owners continue to provide environmental testing services for their clients that range from state to federal accounts.

If lab work sounds interesting now, look at what worker-ownership can do to retail jobs. Island Employee Cooperative, Inc. (IEC), comprised of 62 worker-owners, is the largest worker cooperative in Maine and the twelfth-largest worker cooperative in the nation. After 43 years of operating the Burnt Cove Market, V&S Variety and Pharmacy, and The Galley (the three retail businesses which became IEC), Verne and Sandra Seile started thinking about retirement. Their employees looked to local community development financial institutions (CDFIs) for technical assistance and capital to purchase the three businesses and to become a worker cooperative. While opportunities for advancement  in retail work are typically considered minimal, IEC members, as worker-owners, are empowered. Members receive continued education and training from the Eastern Maine Community College through a customized curriculum that includes business and financial management courses. 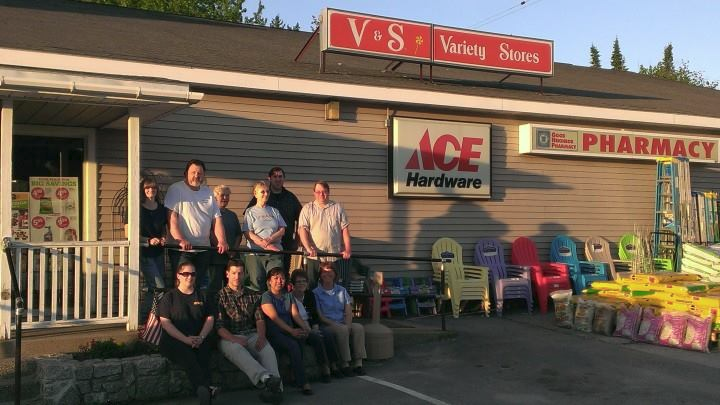 Further exploring Maine’s advancements in worker-ownership, since 1995, Crown O’ Maine Organic Cooperative (COMOC) has connected farmers, fisherman, and artisans with local buyers from restaurants, buying clubs, and retailers. The Vassalboro, Maine cooperative currently distributes local food to 38 co-ops and buying clubs in Maine, selling more than $5 million in goods over the last three years, "and it all goes back to [their] local community. Every dollar into a co-op has a purpose and a place in the community,” notes co-owner Marada Cook.

The classic story of a company starting in a two-car garage is always inspiring and that’s exactly how Hypertherm began. Since its 1968 invention of a plasma cutter, the Hanover, New Hampshire metal cutting company has maintained employee ownership as a focus. In 2001, Hyperthem became 30 percent employee-owned and in 2014, it broadened its ESOP to become wholly employee-owned. Drawing all of its energy from renewables, Hypertherm is the only company in the metal-cutting industry to earn a spot on EPA’s “100 percent Green Power Users.” Associate-owners continue to support renewable energy generation by serving on the board of the Hypertherm Owners’ Philanthropic Endeavors (HOPE) Foundation, which provides support to non-profits and invests in renewable energy.

Equivalent to cutting through metal with water is this media company helping clients like Ithaca College, Century Link, and Bausch+Lomb break through markets with innovative strategies. Sixteen years after its founding, the Rochester, New York-based Butler/Till Media & Communications became wholly employee-owned. After a three-year growth rate of 51 percent and reaping $10.9 million in revenue in 2014, the timing was right to transfer ownership to the 87 employees. And so far, it's paid off, as Butler/Till CEO Peter Infante notes, “A lot of times clients like to deal with the owner of the company, and in this sense they always get to deal with the owner because [they are] dealing with someone who has a level of investment in the success of the company.”

Lastly, while we consume media virtually from our couch, we look at the industry of long-distance truckers who help transport the goods we consume to our communities. Celebrating its 40th anniversary with a loud honk, J&R Schugel Trucking’s president Rick Schugel announced the establishment of the company’s new ESOP which would pass 100 percent of the family-owned business down to the Schugel’s fourth generation – its employees. The $48 million a year trucking firm based in New Ulm, Minnesota has serviced 48 states and has a fleet of over 1,000 trailers.

These 16 companies are just a sliver of businesses that have become worker-owned cooperatives or that offer ESOPs. They show that the structure of a democratized workplace is not limited to a particular industry or scale and encourage us to develop and patronize democratic workplaces. We hope to see these businesses grow stronger and can’t wait to see what is to come from next year’s class of awesome employee owned businesses.